Do I need automation or robotics?

First things first, if you are a business owner you are probably wondering whether automation or robotics is right for your business.
The quick answer is: it really depends on your current business needs.

Are they physical tasks or virtual tasks?


If you can think of even one or two tasks which are repetitive or cause a bottleneck, they may be a good candidate for automation.
If they are physical tasks, industrial automation or robotics could be the answer. If they are virtual tasks, a form of software automation might work.

Automation means using computer software, machines or other technology to carry out a task which would otherwise be done by a human worker. There are many types of automation, ranging from the fully mechanical to the fully virtual, and from the very simple to the mind-blowingly complex.
Robotics is a branch of engineering which incorporates multiple disciplines to design, build, program and use robotic machines.

There are two basic types of automation: software automation and industrial automation.

For example, GUI test automation is a way to test computer programs. It involves recording the actions of a human while they are using a graphical user interface. These actions are then replayed to autonomously test the program after changes have been made to the underlying software.

Other types of software automation include:
Business Process Automation (BPA) — This is a high-level strategy to streamline business processes. It involves formalizing all processes within the business and then integrating them into automation software. Implementing BPA can involve dramatically restructuring the business.
Robotic Process Automation (RPA) — Despite its name, RPA has nothing at all to do with physical robots. It refers to “software robots” which are programmed to use computer programs in the same way as a human operator would. They don’t necessarily complete tasks in the most efficient way, but they are easier to integrate into the existing business processes.
Intelligent Process Automation (IPA) — This is an extension of RPA which uses artificial intelligence to learn how humans perform tasks when using a computer program. This allows the “software robots” to perform more intelligently than with the static rules used in RPA.

The difference between BPA and RPA is quite subtle. To use an analogy from robotic manufacturing, BPA is a bit like ripping out your entire human-operated production line and replacing it with a fully autonomous factory. RPA is like adding a collaborative robot to one workstation within the production line.

Industrial automation is all about controlling physical processes. It involves using physical machines and control systems to automate tasks within an industrial process. A fully autonomous factory is the extreme example.

There are many types of machine within industrial automation. For example, CNC machines are common in manufacturing.

Robots are only one type of machine.

What Is Robotics?
Let’s start with the basics. Robots are programmable machines which are able to carry out a series of actions autonomously, or semi-autonomously. They interact with the physical world via sensors and actuators. Because they are reprogrammable, they are more flexible than single-function machines.

So… Do I Want Robotics or Automation?
When deciding whether to invest in automation for your business, consider the following:

About us:
Data Driven Projects & Professionals.
Industry 4.0 is the current trend of data exchange, automation and interrelationship in manufacturing technologies towards Smart Industries. This revolution is driven by giant leaps in ICT innovation and promises to radically alter the face of industry in the coming decades, based on a network-centric communication between players, humans and systems that implement high quality business processes and management, in the entire value network, including the end-users.
We are looking forward to your use cases, your challenges, Please contact us to team up.
Amersfoort:
https://makelaar-gids.nl/ddpro/
https://www.datadrivenpro.nl
https://twitter.com/dutch_travel
Data Driven Projects – Data Driven Professionals
Nijverheidsweg Noord 60- 50
3812 PM Amersfoort
Contact- at DDPro
0031-334654637 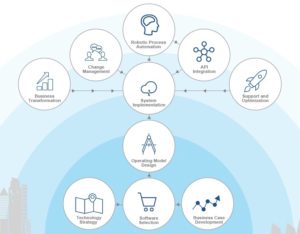